Numerous factors contribute in varying degrees to determine a coffee bean’s flavour. As it is with wine, the geography, geology, and climate of its growing region has a profound effect on its taste profile.

High altitudes are considered ideal for growing the coffee plant, with cooler temperatures delaying the growth cycle. This allows the bean to go through a longer maturation process, thus creating a much fuller, richer, and more pronounced flavour. This extended maturation process also ensures that the beans are imbued with the flavours typical of the region in which they are grown. High elevation beans retain their flavour longer in storage because their extended development produces a denser and harder bean. Scientific studies comparing high and low-altitude beans have determined that high-altitude beans have a far superior body and aroma. Coffea Arabica grows best at high altitudes, though it is a more expensive bean to grow — not only does it have a longer maturation period but it is also generally selectively hand-picked instead of being strip-picked, resulting in a relatively low yield.

Low-altitude coffee plants produce higher yields due to faster ripening times, but the beans need to be treated differently than those from higher altitudes — all the way from roast to brew. With low-elevation varieties producing a much softer bean due to their fast development, they are not as tolerant of darker roasts. Best when lightly roasted, the flavour profile is often described as “earthy, muddy, grainy, or rubbery.” Robusta coffee grows well at lower altitudes because it is better suited to tougher conditions, such as higher temperatures and consequent potential fungal contamination. 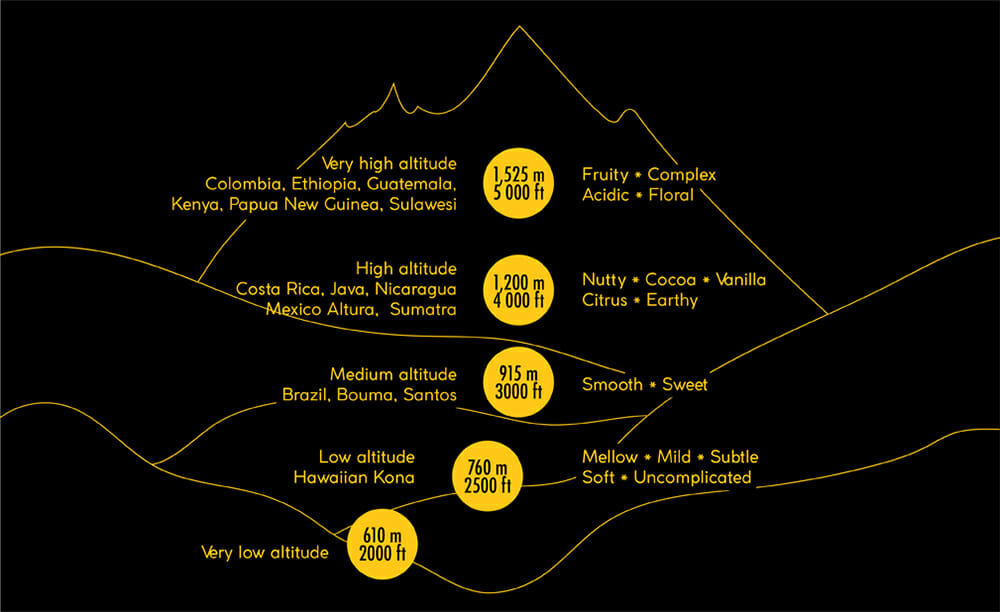 This diagram attempts to classify the flavour profiles characteristic of Arabica coffee beans grown at different altitudes, high through low, though these can only serve as a guide due to the many other influencing factors involved in coffee cultivation and production. However, generally speaking, the longer maturation process of higher-altitude beans leads to more complex sugar formation, which yields deeper flavours, whereas lower-altitude beans are generally milder and less acidic.

Additionally, the altitude at which the coffee plant is grown is a major factor in the chemical makeup of the bean. Robusta has a much higher caffeine content than Arabica, and this is said to offer the plant natural insecticidal properties, adding to the sturdy nature of the variety and helping make it better able to withstand the environmental stresses present at low altitudes. Some scientists believe that Arabica has evolved to contain lower levels of caffeine because its bitterness as a defence against insects is not imperative on higher ground.